Vanessa Dziuba is a young French artist. Her drawings and her collages are more than poetic, they are no completely abstract and tent to make you recognize parts of it. It is never totally unknown grounds, somehow they convey a feeling of familiarity. We at Hlow wanted to understand why.

Young, woman, artist, does it work together? Are you happy Vanessa? What is your everyday life? What are your dreams, your projects?

I don’t think that these words go well together, nor that they ever did. However, this does not discourage me. I feel that I am in a positive dynamic right now. I get into a lot of interesting and attractive projects. I have a lot of discussions around me about the problematics created by the artistic works and systems, and about solutions that are available for artists…and this gives me the support I need. The fact that we ask ourselves those questions, even without responding to them, enables me to live a dynamic and proactive life.

My daily life is an interweaving of several things: I share my time between my workshop practice where I draw and experiment, moments when I write my new projects down, or when I manage collective projects, and other moments that are dedicated to other jobs that have nothing to do with my art (that’s why I need some strength to go back to my workshop practice). My problems lie more in the right organisation and balance of my schedule. I realize now that I am happy when I see a bit of evolution everyday. My projects and dreams are very varied! I am quite down to earth and concrete, I do not really know if I have absolute dreams, I have the impression I really do what makes me happy on a daily basis. Could you tell us a bit about Coral Gables, about your relation to architecture, to tropical weather and to the absurd juxtaposition of the contemporary world? Why have you chosen the technique of collage for this series?

My first relation to architecture is the place I grew up in. It was in Nanterre in a building by Jacques Kalisz, at the 15th floor, with a view on the towers of La Défense (the Paris Business District, with skye scrapers and all…). My relation to the landscape has first been shaped by this view, this sort of striking composition.

The series Coral Gables comes from other previous series. I often proceed by interconnections. A series calls for another and it often happens that I find myself working on several series at the same time. Architecture is a recurrent theme of mine: space and scale are things that I love to transform with the angle I take or with the shapes I suggest. My shapes are often parts of existing and real elements. The choice of collage has occurred when I realized I wanted to superpose several things in the same image: I wanted the shapes to become independent, as if I was drawing using surfaces instead of lines. Collage came in naturally because it enables me to create some lines in another way.

From our point of view (we, being the hlow team), your drawings and collages have in common an infinite precision, a certain taste for patterns and a kind of abstraction, inherited from the aesthetics of the 70s and the 80s. Is it on purpose? Are you able to analyse where it comes from?

Of course, it’s on purpose. I love looking at architecture, I live un the 13th district in Paris, where I am surrounded by buildings from the 70s and the 80s. I also look at buildings from other periods of time, as the ones of the Bauhaus

or the architectures of Buckminster Fuller for instance. 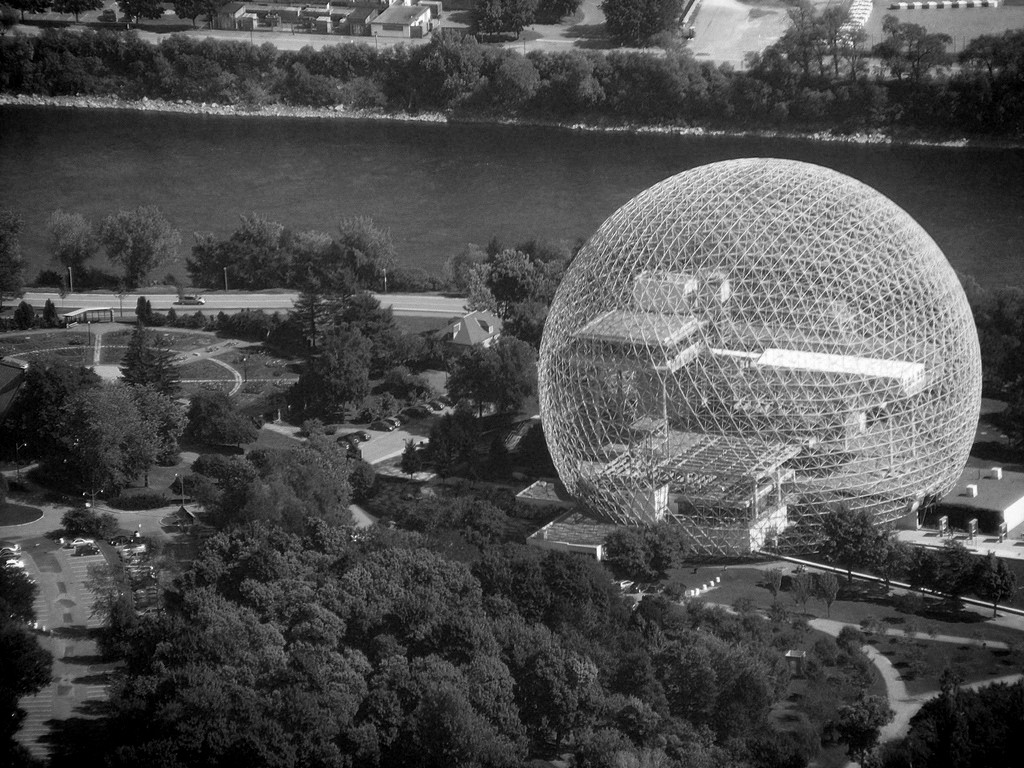 Recently I have visited the Le Corbusier foundation, and I have greatly appreciated the very peculiar blend of color, the fake simplicity of spaces, the details such as the removal of a baseboard, to avoid adding an unnecessary bit of wood. 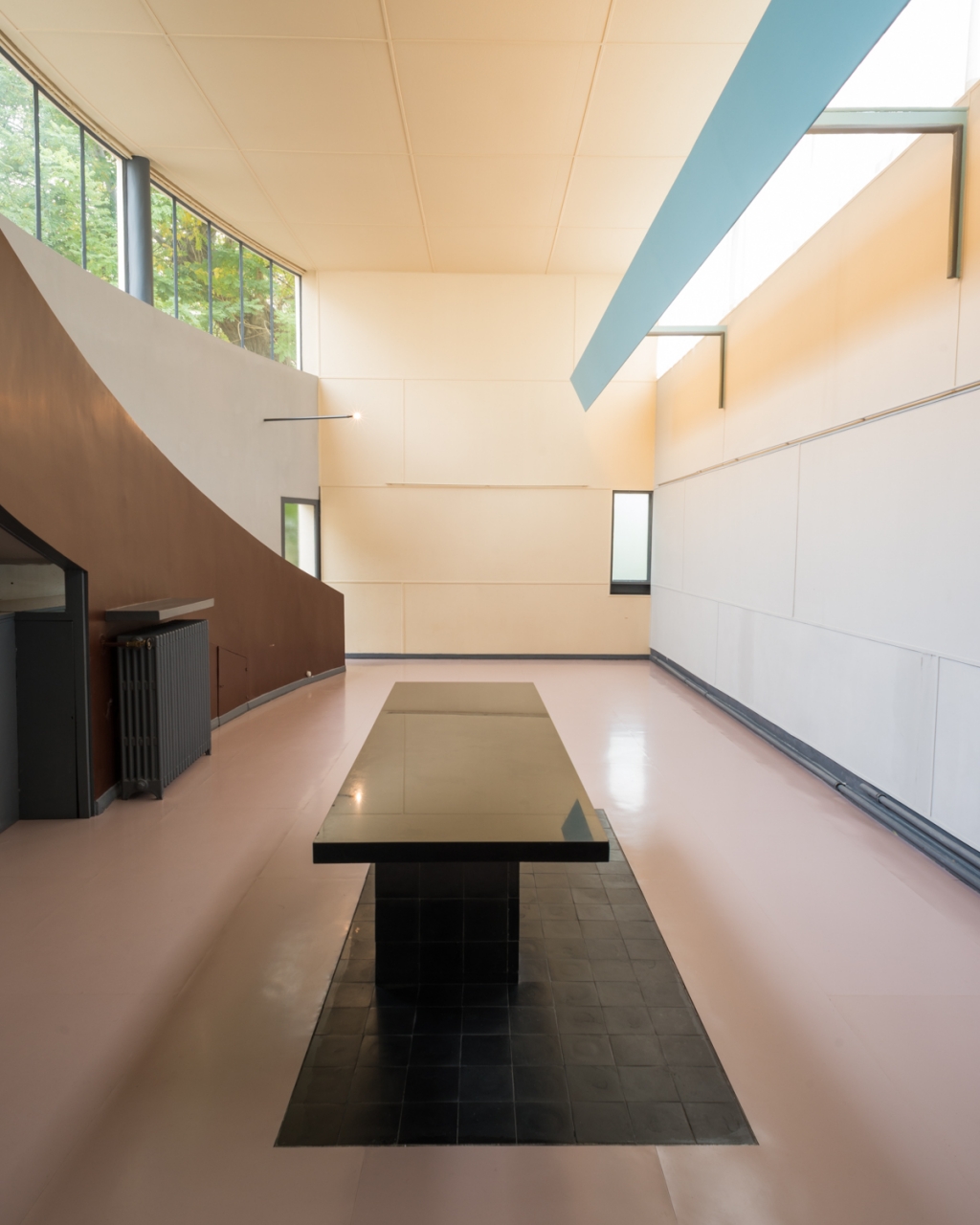 Right now, I am really into Viallat’s painting,

and other artists such as Nathalie du Pasquier I try to draw objects that have an uncertain scale, so that we are never sure wether it is a building in which we can enter or a piece of furniture.

We have met you in Basel, last June, on your booth in a fair selling only editions, where you represented your collective, called Modèle Puissance, of which you are one of the founding members. What is it exactly?

Modèle Puissance is the gathering of several artists under a same name, we do not produce images together but we have gathered to talk about our work and to make editions. We create books, editions, that we spread through the web or on editions fairs, salons or shows.

I am attracted to the book, as an object, by the print, and the editions in general. I love its autonomy and the fact that it lasts longer than an exhibition, it enables us to think of a different way to show drawings.

You have just took part in the MAD, the edition fair at the Maison Rouge in Paris, what are your projects? Any news you would like to share with us?

I have just participated in many editions fairs in the end of this year. I love to meet people and to discuss about my work in a context different than the one of an exhibition. I am presently working on several projects, among which another project of a collective called Zelig Leatherman. It is a sound project that will be broadcasted during the the salon Galeristes at the Carreau du Temple, in Paris, next December. And next January, I will show my drawings and editions with Jean-Philippe Bretin at the show called The Slope of Things in Orleans (France) at the Poctb art center.

Could you tell us a bit about the Collection zine?

Collection is a publication of interviews about contemporary drawings. It exists since 2010 and we are going to publish its 5th issue at the beginning of next year. I am part of a 5 people editorial team: Sammy Stein, Julien Kedryna, Jean-Philippe Bretin, Antoine Stevenot and myself. We meet international artists, emerging or recognized, to talk about their work. The form of the interview was privileged because we wanted the artists to speak for themselves. We discuss with visual artists, designers, cartoon authors but also unclassifiable personalities who develop a strong link to drawings.